Tons of Fall crafts for kids

We love crafts at our house! We also love simplicity - none of those Pinterest projects that are clearly done by professionals and not real children (especially ones with special needs).  I don't mind making a mess in the name of art and fun, but I most love the crafts that require little clean up.

We love crafts at our house! We also love simplicity - none of those Pinterest projects that are clearly done by professionals and not real children (especially ones with special needs).  I don't mind making a mess in the name of art and fun, but I most love the crafts that require little clean up. 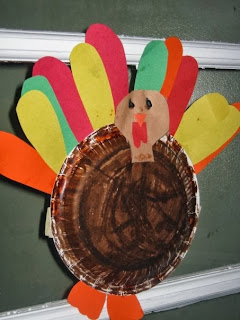 Turkey - My 4 year old was able to paint it himself and he cut some of the feathers out (after I drew the pattern), I made the feet, and the rest was my 9 year old.  The eyes are black beans because we were attempting to use different textures and objects in our art. 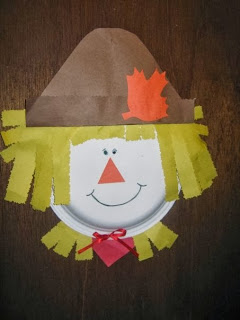 Scarecrow - The girls use those textured scissors to cut out his straw hair and neck pieces.  I made the leaf and bow for them to glue on. I saw a project somewhat like this in Oriental Trading and didn't want to pay for a 12 pack, so we made our own with construction paper. 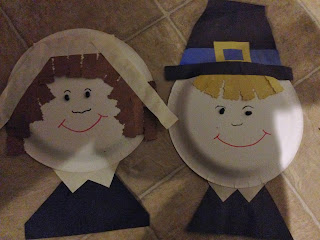 Pilgrims - The girls were unsure how to make pilgrims so I helped cut out some shapes for them to glue on.  Once I got them started they had it figured out.  Again, they made eyes with black beans. 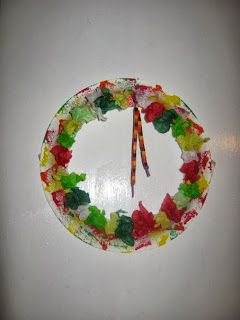 This is my favorite because I think the kids couldn't make up their mind between Christmas and Thanksgiving in their color scheme.  I may keep it up for both!

Cut out the center of a paper plate to make a wreath.  They (Julia -12, Taylor -9) used sponges and paint to paint the entire remaining surface of the plate.  Dean (4 yrs) helped crinkle up tissue paper squares and glue on.

For added flair they punched a hole in the top and added these beads.  Dean loves stringing beads so he used pony beads and made a pattern but it is very Thanksgiving-y and the rest of the wreath seems more Christmas-y. I think that's allowed in art though, right? 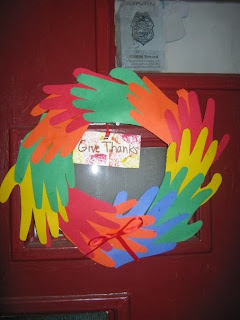 This was only Julia's hand so I think a version with every family member included would be fun.  We traced her hand once and then she used that as a pattern for the rest of the hands.  They are glued to a paper plate with the center of the plate cut out.  To attach the "Give Thanks" sign she punched a hole in the plate and tied it with ribbon.  It is decorated with paint and sponges. 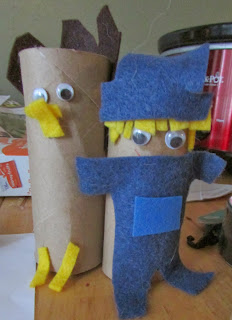 Again, this one was all Julia. Toilet paper rolls, felt, and googly eyes make turkey and scarecrow table toppers. 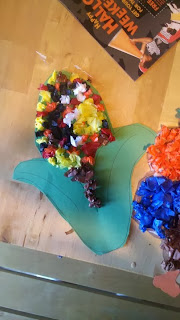 This Indian Corn was made with construction paper and tissue paper squares. Dean (my 4 year old) loves glueing. Like an unhealthy level of love for it. So we did this together since it involves lots of glue. :) 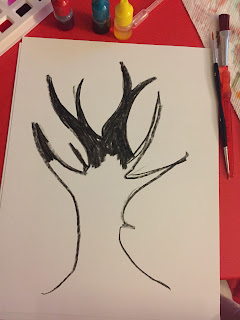 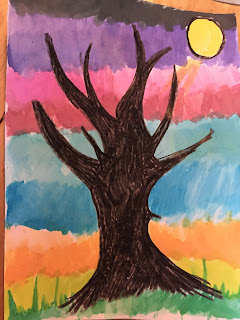 I used a black crayon to freehand draw a tree (I’m NOT an artist so bear with me) then the kids used watercolor paints to add color – the crayon acts as a watercolor-resist.

This is the same concept – I used crayons to draw leaves and then watercolor paint over it. 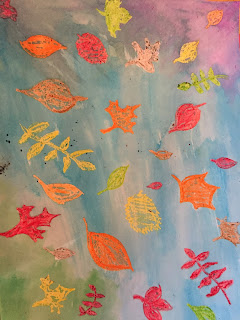 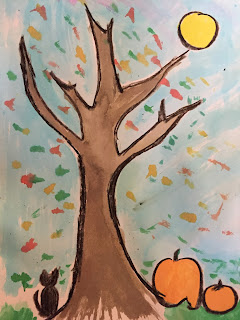 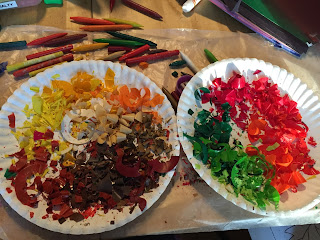 We used a pencil sharpener to create a bunch of crayon shavings to make waxed paper leaves. Crumble the shaving between 2 layers of waxed paper then place the paper between layers of dishtowels.  Iron on medium heat until all the crayon shavings have melted between the papers.
I traced a leaf pattern onto the melted crayon and cut them out.  Iron between towels again to seal the edges and hang.  We taped ours in the window to allow sunlight through. 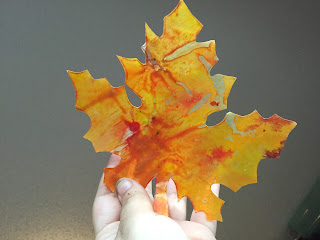 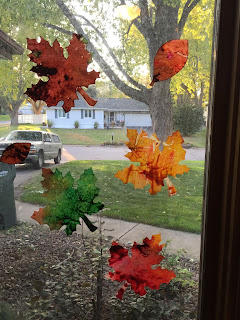 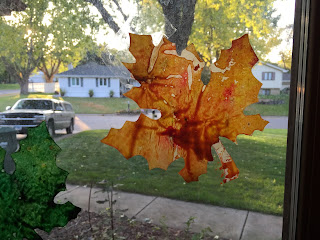 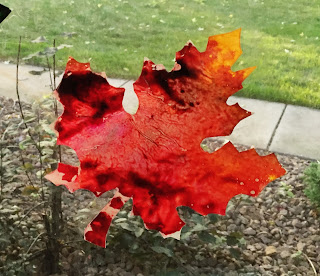 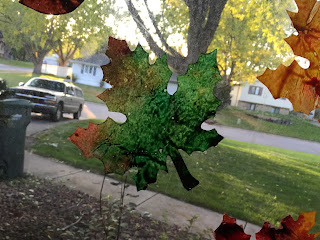 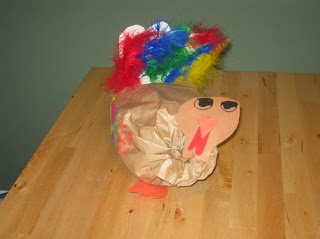 It was Julia's idea to make a centerpiece.  Although not a very original idea, she is convinced she invented this paper lunch bag turkey!! Stuffed with paper and closed with a rubber band. A tip? We should have drawn the wings on the side of the bag BEFORE stuffing it! LOL 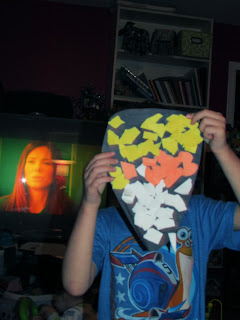 More gluing for Dean. He also loves ripping the paper. So I cut a black sheet of paper into a shape somewhat resembling candy corn and Dean did most of the ripping and all the gluing. (That's Sandy in The Heat in the background. I promise I didn't let him watch it - it was paused for a photo op). 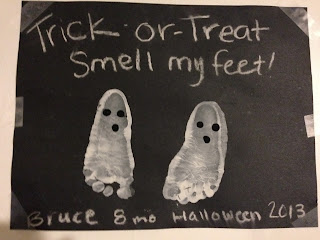 Foot-print ghosts.  Adorable, yes? Not my idea - we made this in baby class at ECFE. I've also seen it on Pinterest.  But I must share my baby's adorable feetsies with you! The eyes are black paint applied with Q-tips and the words were written with chalk. 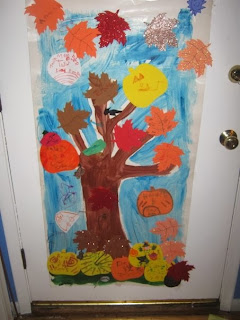 We covered the backside of our front door with a huge piece of paper from one of those large rolls (we get ours at Ikea). The girls painted the tree and the sky and allowed to dry (well, that part was tough - Baby Bruce wanted to get into it!!). 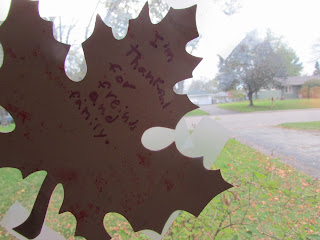 The pumpkins and leaves are foam cutouts from the craft store that they wrote things they were thankful for on.  They also made some construction paper ghosts and a black cat and added glitter glue to some of the leaves.

The girls wrote things they were thankful for on each of these large white leaves from the dollar store.  Dean wasn't interested in participating in this one. He is not thankful for anything today. Maybe he'll be happier after a nap??

They colored the back of each leaf (Julia with paint, Taylor with markers) and taped up in the window.  We decorate our window for each season and holiday. Usually with cheap construction paper.

Placemats made with leaves: 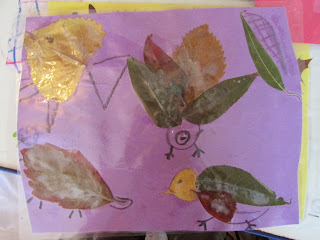 We used leaves to make animals and silly people.  The girls did a great job! 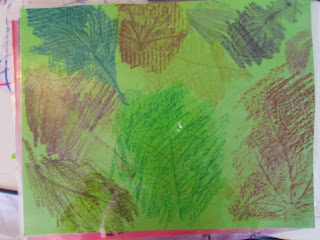 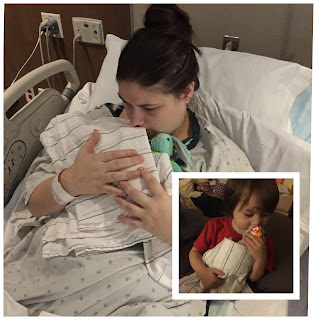